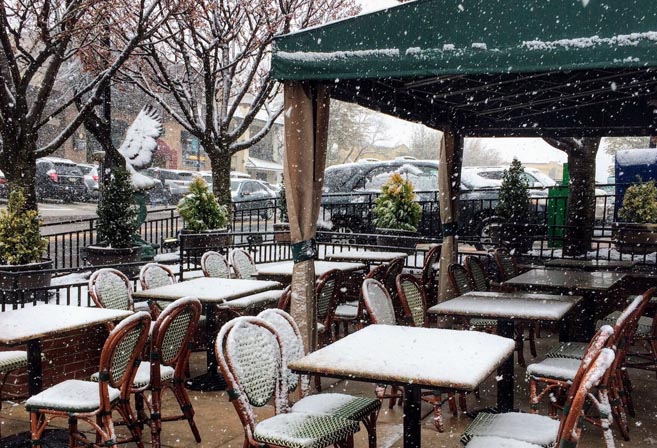 The restaurant industry’s nightmare year is about to get even darker.

The cold weather is expected to slow demand for D.C. restaurants and make it more difficult to dine outdoors, a factor that has helped keep businesses alive during the pandemic. How willing are customers to sit outside for service? With federal funds for the industry on hold and a new wave of COVID-19 on the rise, the industry is anticipating more shutdowns and closures.

“It’s going to hurt a lot,” Geoff Dawson (who owns multiple large beer halls in and around downtown D.C., including Penn Social and Franklin Hall) said. “So many businesses are on the razor’s edge right now going, ‘OK, I think I can be here another two weeks, maybe three.’ That’s the nature of sitting dead in the water. We don’t see any answer.”

Restaurant owners say their business has largely remained steady through October, but sales are still far below their normal levels. The Restaurant Association of Metropolitan Washington said restaurant sales on average are 70% lower than they were last year.

The pandemic has already left dozens of casualties in the D.C. restaurant scene. A running tally from Eater DC has found more than 50 restaurants that have closed permanently since March. Retail vacancy on D.C.-area high streets has increased from 6.9% before the pandemic to 15.8%, according to new data from Dochter & Alexander Retail Advisors.

The restaurant industry is working to adapt outdoor spaces for the cold weather and to make people feel comfortable dining indoors to help fill their limited capacity.

But preparing restaurants for the winter can require significant investments, and some owners are hesitant to make those bets, considering their seemingly long odds of paying off.

Deputy Mayor for Planning and Economic Development John Falcicchio said the applications have already exceeded the $4M it initially allotted for the program, but it is continuing to work through the waitlist.

El Rey is one of the restaurants that have received the $6K grant, and Hilton said it played a role in his decision to keep the business open.

“That was a big contributing factor because of the type of assistance that can help for that particular business, because we do have access to a pretty good streatery there,” Hilton said. “It is the type of business where I think people will brave lower temperatures a little bit deeper into the winter.”

But that $6K still represents a fraction of the cost some restaurant owners need to invest to prepare for the winter, Neighborhood Retail Group CEO Bethany Kazaba said. She worked with Chinatown‘s Bar Deco to prepare an enclosed, 100-seat outdoor tent for its rooftop.

Courtesy of Bethany Kazaba
The new rooftop tent at Bar Deco in Chinatown.

The owner of Bar Deco, Noe Landini, invested $75K for the outdoor tent, and he has taken other measures such as installing plexiglass shields, Kazaba said.

“These outdoor spaces are super expensive, but it’s going to be the only thing that allows places to stay open during the winter months,” Kazaba said.