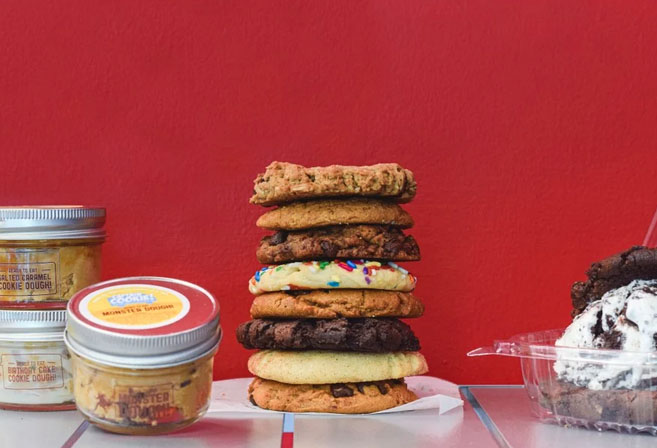 Get ready for a talent wave of new dining options. Here’s who’s coming and what’s on the menu.

D.C.’s high rents are another factor propelling some darlings of the District’s food scene into Virginia. Rock Harper, whose Queen Mother’s fried chicken operation began as a D.C.-born concept, says that rents in the capital didn’t really drop during the pandemic.

“Landlords figured they’d be through this in a couple of years,” he says. “But people in the suburbs just aren’t going into the city [anymore], and independent restaurants can’t make it at $75 to $125 per square foot.” In late 2020, Harper relocated his business to Arlington, where he shares a kitchen and dining space with The Café by La Cocina VA, just off Columbia Pike.

“Businesses aren’t charities,” says Neighborhood Retail Group CEO Bethany Kazaba, who recently brokered a deal for sweets purveyor Captain Cookie and the Milkman to open its first Virginia storefront in Courthouse (more on that later). “It’s a numbers issue—the economics of paying $40 to $50 a square foot in Virginia, versus the high $60s and up in D.C. And downtown’s triple net costs [building maintenance, insurance and property taxes] add [another] $18 to $24 a square foot. That’s a huge expense.”

Kazaba’s client portfolio, which is usually evenly spread across the DMV, has been heavily skewed toward Virginia this past year. She says the commonwealth’s earlier relaxation of mask mandates and pandemic restrictions, combined with its generally pro-business attitude, has made D.C. operators look at Virginia in a different way.

Read more of this article, including more on Captain Cookie and the Milkman in the Arlington Magazine.